We recently wrapped up the 2019 Analytics Solutions Conference in Minneapolis, MN. This was the first time we organized a US conference on analytics with our Norwegian partners, Camo Analytics. It could not have gone better! A BIG congratulations on a job well done to Shari Kraber who spearheaded the organization of this conference.

The goal of the conference was to help attendees transform their business, from R&D to production, using data-driven tools. If I may toot our own horn here, we did that. There was a lot of information to digest at this meeting, but the camaraderie of attendees made it easy. We overheard many conversations in the halls between attendees about what they just learned or discussing potential solutions to business problems they were facing.

The conference started with a short course day. Two all day seminars were conducted in parallel, one titled “Practical DOE: ‘Tricks of the Trade’” and the other “Realizing Industry 4.0 through Industrial Analytics”. We saw a lot of people experienced with design of experiments (DOE) go to the Industry 4.0 course and a lot of the analytics pros headed to learn about DOE. What a great way to start!

Day one wrapped up with an opening reception for all attendees and speakers, fostering networking and building relationships.

The conference days were filled with session talks that wrapped around keynote presentations (a fantastic trio of speakers, find out more at the link below). The result was a great mix of academic-style overviews with down-to-earth, real-world case studies. It struck a perfect balance. 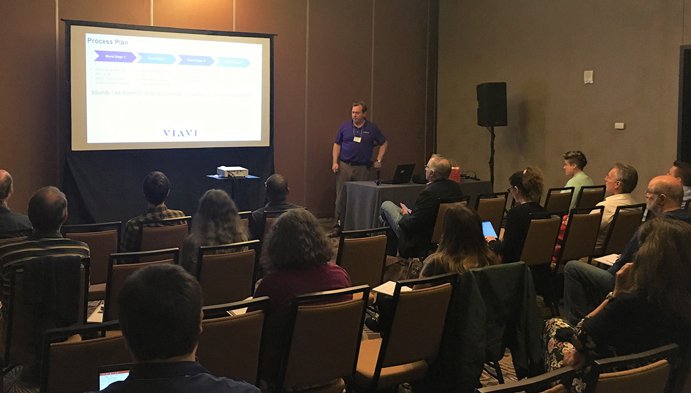 If you couldn’t make it to the conference, details on each presentation (including pdf’s of the presentations), are posted on the ASC speakers page.

To add some fun to the mix, the evening’s social event was a dinner cruise on the Mississippi River for all attendees. It was quite the treat, especially to those of us who live here! We rarely take the opportunity to enjoy activities like this in our own backyard. We traveled thru a lock, spotted a bald eagle in the trees, and enjoyed the casual atmosphere.

The next Stat-Ease hosted conference will be our 8th European DOE Users Conference. This year it will be held in Groningen, Netherlands from June 17-19. We hope to see you there!

If you would like to be kept in the loop about the conference, sign up for our mailing list. We will be sending out information regarding a call for speakers and registration later in the fall. Sign up now, before you forget!

See you in Groningen!

Graduate students are frequently expected to use design of experiments (DOE) in their thesis project, often without much DOE background or support. This results in some classic mistakes.

The number one thing to remember is this: Using previous student’s theses as a basis for yours, means that you may be repeating their mistakes and propagating poor practices! Don’t be afraid to forge a new path and showcase your talent for using state-of-the-art statistical designs and best practices.

Greg's DOE Adventure: What is Design of Experiments (DOE)?

Hi there. I’m Greg. I’m starting a trip. This is an educational journey through the concept of design of experiments (DOE). I’m doing this to better understand the company I work for (Stat-Ease), the product we create (Design-Expert® software), and the people we sell it to (industrial experimenters). I will be learning as much as I can on this topic, then I’ll write about it. So, hopefully, you can learn along with me. If you have any comments or questions, please feel free to comment at the bottom.

So, off we go. First things first.

What exactly is design of experiments (DOE)?

When I first decided to do this, I went to Wikipedia to see what they said about DOE. No help there.

That’s not what I would call a clearly conveyed message. After some more research, I have compiled this ‘definition’ of DOE:

Design of experiments (DOE), at its core, is a systematic method used to find cause-and-effect relationships. So, as you are running a process, DOE determines how changes in the inputs to that process change the output.

Obviously, that works for me since I wrote it. But does it work for you?

So, conceptually I’m off and running. But why do we need ‘designed experiments’? After all, isn’t all experimentation about combining some inputs, measuring the outputs, and looking at what happened?

The key words above are ‘systematic method’. Turns out, if we stick to statistical concepts we can get a lot more out of our experiments. That is what I’m here for. Understanding these ‘concepts’ within this ‘systematic method’ and how this is advantageous.

Well, off I go on my journey!

Recently, Stat-Ease Founding Principal, Pat Whitcomb, was interviewed to get his thoughts on design of experiments (DOE) and industrial analytics. It was very interesting, especially to this relative newbie to DOE. One passage really jumped out at me:

“Industrial analytics is all about getting meaning from data. Data is speaking and analytics is the listening device, but you need a hearing aid to distinguish correlation from causality. According to Pat Whitcomb, design of experiments (DOE) is exactly that. ‘Even though you have tons of data, you still have unanswered questions. You need to find the drivers, and then use them to advance the process in the desired direction. You need to be able to see what is truly important and what is not,’ says Pat Whitcomb, Stat-Ease founder and DOE expert. ‘Correlations between data may lead you to assume something and lead you on a wrong path. Design of experiments is about testing if a controlled change of input makes a difference in output. The method allows you to ask questions of your process and get a scientific answer. Having established a specific causality, you have a perfect point to use data, modelling and analytics to improve, secure and optimize the process.’"

It was the line ‘distinguish correlation from causality’ that got me thinking. It’s a powerful difference, one that most people don’t understand.

As I was mulling over this topic, I got into my car to drive home and played one of the podcasts I listen to regularly. It happened to be an interview with psychologist Dr. Fjola Helgadottir and her research into social media and mental health. As you may know, there has been a lot of attention paid to depression and social media use. When she brought up the concept of correlation and causality it naturally caught my attention. (And no, let’s not get into Jung’s concept of Synchronicity and whether this was a meaningful coincidence or not.)

So, back to Pat’s comments. The data is speaking. We all need a listening device to tell us what it’s saying. For those of you in the world of industrial experimentation, experimental design can be that device that differentiates the correlations from the causality.