[Disclaimer: I’m not a statistician. Nor do I want you to think that I am. I am a marketing guy (with a few years of biochemistry lab experience) learning the basics of statistics, design of experiments (DOE) in particular. This series of blog posts is meant to be a light-hearted chronicle of my travels in the land of DOE, not be a text book for statistics. So please, take it as it is meant to be taken. Thanks!]

So, I’ve gotten thru some of the basics (Greg's DOE Adventure: Important Statistical Concepts behind DOE and Greg’s DOE Adventure - Simple Comparisons). These are the ‘building blocks’ of design of experiments (DOE). However, I haven’t explored actual DOE. I start today with factorial design.

Factorial design (aka factorial DOE) allow you to experiment on many factors (oh, that’s where the name comes from!) at the same time. A simple version of this: 2 factors, each has two levels. [Mathematically, this is represented by 2 to the power of 2, or 22.] Example time! Cooking Spaghetti. The two factors are temperature of the water and cooking time in that water. Levels are high temperature (100 deg C) and low temperature (80 deg C); and short time in the water and long time in the water. What’s the reason for the experiment? Optimization of the process to make the best tasting (al dente) spaghetti. 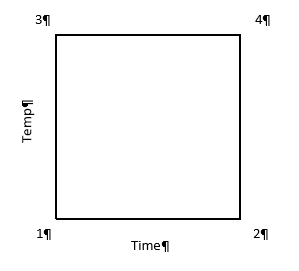 In this case, the horizontal line (x-axis) is time and vertical line (y-axis) is temperature. The area in the box formed is called the Experimental Space. Each corner of this box is labeled as follows:

One takeaway at this point is that when a test is run at each point above, we have 2 results for each level of each factor (i.e. 2 tests at low time, 2 tests at high time). In factorial design, the estimates of the effects (that the factors have on the results) is based on the average of these two points; increasing the statistical power of the experiment.

Power is the chance that an effect will be found, when there is an effect to be found. In statistical speak, power is the probability that an experiment correctly rejects the null hypothesis when the alternate hypothesis is true.

If we look at the same experiment from the perspective of altering just one factor at a time (OFAT), things change a bit. In OFAT, we start at point #1 (low time, low temp) just like in the Factorial model we just outlined (illustrated below). 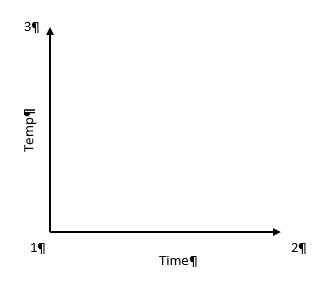 After seeing these results of Factorial Design vs OFAT, you may be wondering why OFAT is still used. First of all, OFAT is what we are taught from a young age in most science classes. It’s easy for us, as humans, to comprehend. When multiple factors are changed at the same time, we don’t process that information too well. The advantage these days is that we live in a computerized world. A computer running software like Design-Expert®, can break it all down by doing the math for us and helping us visualize the results.

Additionally, with the factorial design, because we have results from all 4 corners of the design space, we have a good idea what is happening in the upper right-hand area of the map. This allows us to look for interactions between factors.

That is my introduction to Factorial Design. I will be looking at more of the statistical end of this method in the next post or two. I’ll try to dive in a little deeper to get a better understanding of the method.

Disclaimer: I’m not a statistician. Nor do I want you to think that I am. I am a marketing guy (with a few years of biochemistry lab experience) learning the basics of statistics, design of experiments (DOE) in particular. This series of blog posts is meant to be a light-hearted chronicle of my travels in the land of DOE, not be a textbook for statistics. So please, take it as it is meant to be taken. Thanks!

As I learn about design of experiments, it’s natural to start with simple concepts; such as an experiment where one of the inputs is changed to see if the output changes. That seems simple enough.

For example, let’s say you know from historical data that if 100 children brush their teeth with a certain toothpaste for six months, 10 will have cavities. What happens when you change the toothpaste? Does the number with cavities go up, down, or stay the same? That is a simple comparative experiment.

“Well then,” I say, “if you change the toothpaste and 6 months later 9 children have cavities, then that’s an improvement.”

Not so fast, I’m told. I’ve already forgotten about that thing called variability that I defined in my last post. Great.

In that first example, where 10 kids got cavities. That result comes from that particular sample of 100 kids. A different sample of 100 kids may produce an outcome of 9, other times it’s 11. There is some variability in there. It’s not 10 every time.

[Note: You can and should remove as much variability as you can. Make sure the children brush their teeth twice a day. Make sure it’s for exactly 2 minutes each time. But there is still going to be some variation in the experiment. Some kids are just more prone to cavities than others.]

How do you know when your observed differences are due to the changes to the inputs, and not from the variation?

I’ve seen it written as:

In essence, this is the amount of variance for individual observations in the new experiment (multiplied by the number of observations) divided by the total variation in the experiment.

If that ratio is equal to 1, more than likely there is no difference between the two. In our example, changing the toothpaste probably makes no difference in the number of cavities.

As the F-value goes up, then we start to see differences that can likely be credited to the new toothpaste. The higher the value of the F-test, the less likely it is that we are seeing that difference by chance and the more likely it is due to the change in the input (toothpaste).

Question: Why is this thing called an F-Test?

Answer: It is named after Sir Ronald Fisher. He was a geneticist who developed this test while working on some agricultural experiments. “Gee Greg, what kind of experiments?”. He was looking at how different kinds of manure effected the growth of potatoes. Yup. How “Peculiar Poop Promotes Potato Plants”. At least that would have been my title for the research.

Greg's DOE Adventure: What is Design of Experiments (DOE)?

Hi there. I’m Greg. I’m starting a trip. This is an educational journey through the concept of design of experiments (DOE). I’m doing this to better understand the company I work for (Stat-Ease), the product we create (Design-Expert® software), and the people we sell it to (industrial experimenters). I will be learning as much as I can on this topic, then I’ll write about it. So, hopefully, you can learn along with me. If you have any comments or questions, please feel free to comment at the bottom.

So, off we go. First things first.

What exactly is design of experiments (DOE)?

When I first decided to do this, I went to Wikipedia to see what they said about DOE. No help there.

That’s not what I would call a clearly conveyed message. After some more research, I have compiled this ‘definition’ of DOE:

Design of experiments (DOE), at its core, is a systematic method used to find cause-and-effect relationships. So, as you are running a process, DOE determines how changes in the inputs to that process change the output.

Obviously, that works for me since I wrote it. But does it work for you?

So, conceptually I’m off and running. But why do we need ‘designed experiments’? After all, isn’t all experimentation about combining some inputs, measuring the outputs, and looking at what happened?

The key words above are ‘systematic method’. Turns out, if we stick to statistical concepts we can get a lot more out of our experiments. That is what I’m here for. Understanding these ‘concepts’ within this ‘systematic method’ and how this is advantageous.

Well, off I go on my journey!